The Sony STR-DN1060 receiver has a 7.2-channel amplifier and provides an output power of 165W/channel. The receiver also supports dual room mode with high-res audio. If compare Sony STR-DN1060 vs Sony STR-DN1080, the STR-DN1060 has the ability to work with 2 different sets of speakers due to the A / B switching function. Upscaling up to 4K and HDCP 2.2 processing provides high-quality audio and video. The receiver is equipped with Wi-Fi and Bluetooth, supports the reception and playback of high-res audio files from network sources, including Spotify, and playback from external USB storage.

Sony STR-DN1080 is a 5.1.2 (or 7.1) channel device with support of Dolby Atmos and DTS: X versus to Sony STR-DN1080 in which there is no support for such technologies. Sony STR-DN1080 is capable of transmitting 4K video and surround sound to two different residential areas. Wireless capabilities include Bluetooth, as well as Ethernet and Wi-Fi. For a good receiver setup, the DCAC EX auto-calibration system is used, which uses a fairly stereo microphone. 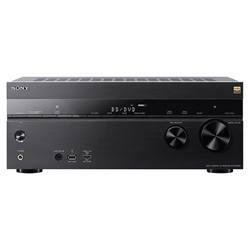 Dolby Digital Plus
has not