It is a 7.2-channel model. Its power is 100W (8 ohms). The design of the STR-ZA1100ES is classic Sony. It features a clean design, with a black, brushed metal front and a full-width display. The front lower portion of the receiver features a magnetic plate that can be removed to reveal all of the controls. With the plate on, the only visible controls are the power button and a large volume knob. If you are not comfortable behind the wheel of an SPL meter, the Sony has a pretty slick auto setup feature.

Sony STR-DN1080 is a 5.1.2 (or 7.1) channel device with support for Dolby Atmos and DTS: X. Its output power is 120W/6 ohms. Workmanship does not raise any questions. Everything sits tight, hangs nothing, does not stagger, and looks impressive and stylish. The design is classic, rigorous and concise. There is nothing superfluous, everything is just the most necessary. On the left is a recessed power button with LED, a headphone jack, a calibration microphone jack and a USB input. I used the calibration microphone several times for optimal layout. 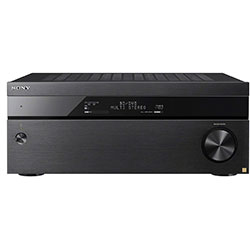 has not
TIDAL, Pandora

has not
Music Center