The STR-ZA810ES is a 7.2 channel receiver whose amplifier delivers 100 W/channel. The receiver works with the latest formats such as HDR and surrounds sound technologies. In comparison Sony STR-ZA810ES vs Sony STR-DN1080, the STR-ZA810ES has bi-amping to produce more detailed sound. Built-in D.C.A.C. auto-calibration technology evaluates the sound picture, emulating the sound of optimally placed speakers. There is also Phantom Surround Back technology, which allows users to achieve virtual 7-channel from a 5-channel configuration.

Sony STR-DN1080 is a 5.1.2 channel device with support for Dolby Atmos and DTS: X as the STR-ZA810ES but has higher amplifier power – 165 W/channel. The remaining connectivity options are quite modest: optical and coaxial inputs, Bluetooth, as well as Wi-Fi and Ethernet. Wireless interfaces also include Chromecast, UPnP and Spotify Connect. The auto-calibration system is the same as in Sony STR-ZA810ES. 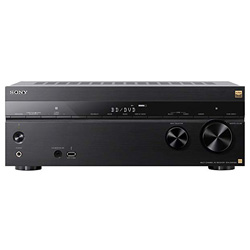 has not
TIDAL, Pandora