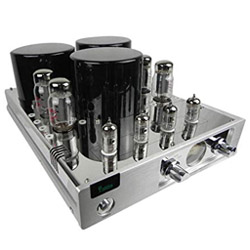 The MC-13S can be one of the main components of your home audio system. It gives the great sound clarity, without drawing attention to itself and without adding a hint of artificiality. Read this YAQIN MC-13S review to be sure that YAQIN MC-13S specs well worth it.

The tone and clarity of the signal allow you to distinguish between individual instruments in any song that you are listening to. When there is silence, you do not have such a low-frequency hiss that you can usually associate with a tube amplifier. It is clearly well-engineered, and a lot of thought and care went into the design and architecture of this piece to maximize the amount of performance you can get out of your system. It delivers 40W at 8-ohm load. Many of the circuit components are of audiophile-grade, produced by famous Japanese, American, and European companies. Their circuits use Solen, Philips, Siemens, and Thomson capacitors. Volume control from ALPS, a well-known Japanese company, is also used. Yaqin vacuum tubes are used by well-known Chinese manufacturers such as Shuguang. Yacin factory received a 3C certificate and a European CE certificate.

The Yaqin MC13S has a very minimal and straightforward circuit. Bells and whistles found in more expensive integrated amplifiers are not here. If you want an auto-mute circuit, a tube auto biasing circuit, a remote control, or even a protective grill, you will need to look elsewhere. At a significantly higher price, Yaqin offers amplifiers that do include the above items. However, there is a silver lining to be found here. The somewhat bare-bones circuitry of this amplifier does deliver a very high-quality sound. The circuitry is based on a time tested, ultra-linear push-pull design that made the sound of an EL34/6Ca7 based integrated amplifier the mainstay of frugal tube amp audiophiles.

The four line inputs, and six spade/banana speaker plugs are first rate, as are the volume control and input switch. There is no phono pre-amplifier fitted.