This model of network receiver has established itself as a 7.2-channel device that attracts attention with the presence of the necessary Wi-Fi function. See more Yamaha RX-V677 specs by turning to this Yamaha RX-V677 review.

The RX-V677 receiver has a seven-channel amplifier, the output power of which is specified in the specifications as cleverly as is usual for receivers in our time. According to Yamaha, the output power of one channel is 150 watts (8 ohms), provided that only this channel is connected, and that the amplifier is operating at its limit. The unit also has an AM / FM tuner if you prefer to listen to the radio in this way. Other features include a limited version of the “high-altitude” Yamaha channels.

The receiver can also be criticized in terms of appearance. Unlike most of the older models in the lineup, the RX-V677 has an asymmetrical front panel, which also does not look too elegant. Our test sample had a Titanium finish, which slightly improved the situation, but in general, the RX-V677 is not the most beautiful device in its class. The device has a DSP processor, which the company has been improving for many years. Many of the DSP's modes of operation are practically useless, but some may still come in handy - especially during computer games.

In terms of a set of I / O, the RX-V677 is equipped well. Six HDMI inputs and one output, which are capable of broadcasting a signal with a resolution of 4K; there is also an upscaling function for the original video. HDMI Audio Return Channel ARC. The receiver is equipped with a wide range of other inputs and outputs that may be needed when bundling the system.

Yamaha still uses the surround sound auto-calibration system, which determines the presence of speakers, their dimensions and installation locations with good accuracy. In my opinion, the system slightly overestimates some parameters, which is good for a spectacular demonstration, but bad for daily use. 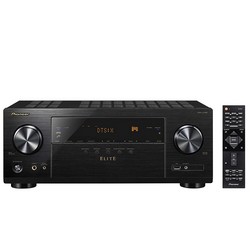